MACARONI AND CHEESE GETS AN ELEGANT FACELIFT! 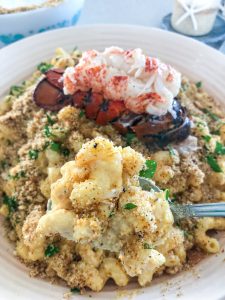 My husband and I were invited to a seafood fest for our dear friend, Fran’s birthday dinner down the Jersey shore. In my typical style, I wanted to bring something special; a special seafood dish that would compliment the other entrees! And what I knew Fran would enjoy and hopefully everyone else, too! I have made many macaroni and cheese dishes in my life, some I’ve baked in the oven, some I cooked over the stove, and one recipe I made in the crockpot! 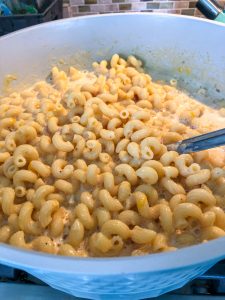 So if you are willing to take a little time for this recipe, I promise it will be worth it! 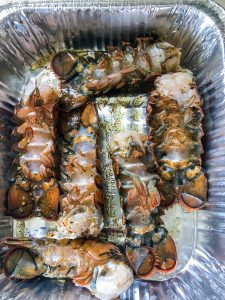 3.I decided to add shallots to the dish, giving it a gentle onion flavor. I sauteed them in the frying pan with a little melted butter. 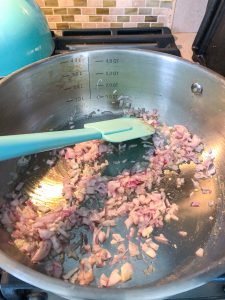 4. Now comes boiling the pasta. I love using cavatappi, which is a “swiggly” type of pasta that has a open tube so it holds sauces so well! And it’s hearty enough to handle all that cheese sauce. Just boil according to directions, and maybe even cook your pasta a minute or two less than what’s called for so it comes out al dente (a little firm). Once you drain the pasta, put it back into the pot. 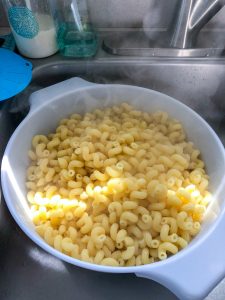 5. While the pasta is boiling, I put the evaporated mild and the eggs in my blender and blended on low so the liquid mixture was well combined. I added some old bay and some of my favorite spice, Happy Paprika, from Hoby’s Essentials. 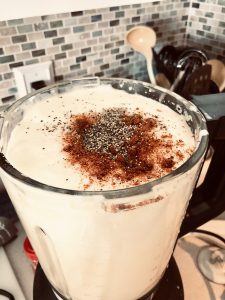 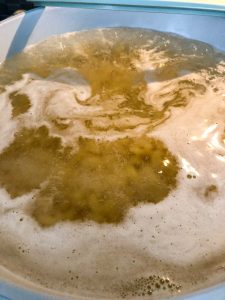 8. I plated the LOBSTER MAC AND CHEESE in a large bowl, and topped it with the bread crumbs and a single lobster tail for a mouth-watering effect!

THIS LOBSTER MAC AND CHEESE IS WORTH THE WORK!

I’m not going to lie and say this was a super easy dish to make! You do need a couple of hours and a glass of wine by your side so you can enjoy the making of this dish! But when I served it, everyone raved and thought it was from the restaurant where they bought most the seafood! I humbly took this as a lovely compliment!

So until next time,

Let’s get cookin’ together! 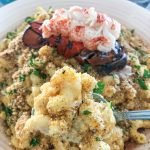 My Lobster Mac and Cheese will be the only mac and cheese you'll ever make! Thanks to Cook's Illustrated testing lots of recipes, their recommended approach to mac and cheese is using evaporated milk, and eggs and cheddar cheeses. And adding lobster made it a silky seafood dish that will have you running back for more!
Prep Time1 hr
Cook Time45 mins
Course: Dinner, Main Course, Side Dish
Cuisine: All
Keyword: cheesymacaroni, lobstermacandcheese, macandcheese, macaroniandcheese
Servings: 8 servings
Author: Madeline Kohler 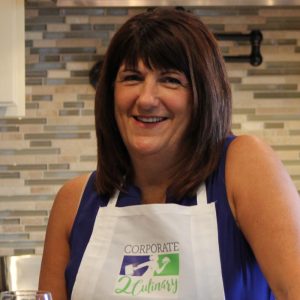